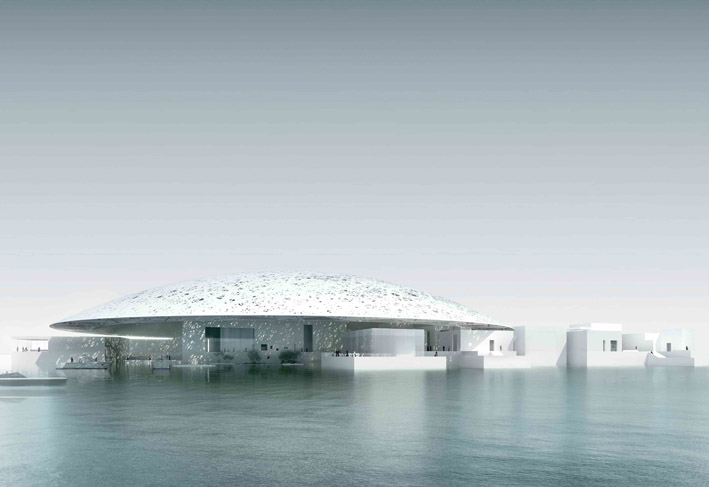 The building is expected to cost about $108 million to build, and will include art from all eras and regions, including Islamic art. 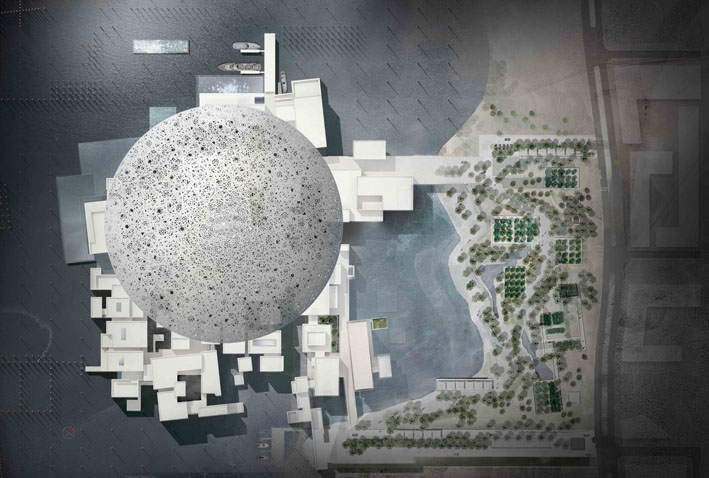 It has been a bumpy ride; plans for a museum were originally announced in Paris in 2007, with an opening date of 2012 mooted. 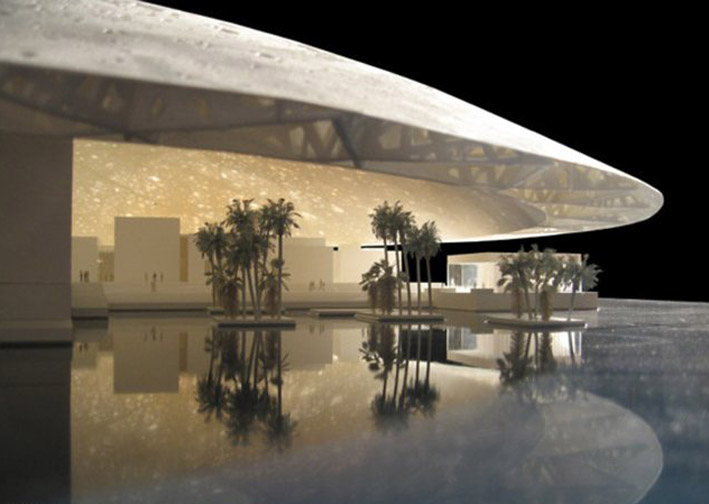 However, the £405 million ‘floating’ art gallery will now open in 2015. It will cover 64,000 square metres including 9,200 square metres of art space. Released plans from Pritzker Prize-winning architect Jean Nouvel show that water will feature heavily, with plazas, pavilions and canals all part of the design, much of which has been inspired by ancient Arabian engineering.

Abu Dhabi, the capital of the United Arab Emirates  to pay $520 million to attach the Louvre’s name to a museum. And there is more: in exchange for art loans, special exhibitions and management advice, Abu Dhabi will pay France an additional $747 million.

For Abu Dhabi, the deal is an important step in its plan to build a $27 billion tourist and cultural development on Saadiyat Island, opposite the city. The project’s cultural components include a Guggenheim Abu Dhabi, a maritime museum and a performing arts center as well as the Louvre Abu Dhabi.

The project will be overseen by a new International Agency for French Museums that is to include the Musée d’Orsay, the Georges Pompidou Center, the Musée Guimet, the Château de Versailles, the Musée Rodin, the Musée du Quai Branly and the Louvre among its members. This agency is also expected to seek new international partners in the coming years.

Apart from paying $520 million to the French agency for the use of the Louvre name for 30 years, with $195 million to be paid within one month, Abu Dhabi has also agreed to make a direct donation of $32.5 million to the Louvre to refurbish a wing of the Pavillon de Flore for the display of international art.

This gallery, to be ready by 2010, will carry the name of Sheik Zayed bin Sultan al-Nahayan, the founder and longtime ruler of the United Arab Emirates, who died in 2004.

Abu Dhabi will also finance a new Abu Dhabi art research center in France and pay for restoration of the Château de Fontainebleau’s theater, which will be named after Sheik Khalifa bin Zayed al-Nahayan, the current president.

France is profiting handsomely from this deal: in exchange for $247 million, it will rotate between 200 and 300 artworks through the Louvre Abu Dhabi during a 10-year period; it will be paid $214.5 million over 20 years for the management expertise provided by its new museums agency; and it will provide four temporary exhibitions a year for 15 years in exchange for $253.5 million. 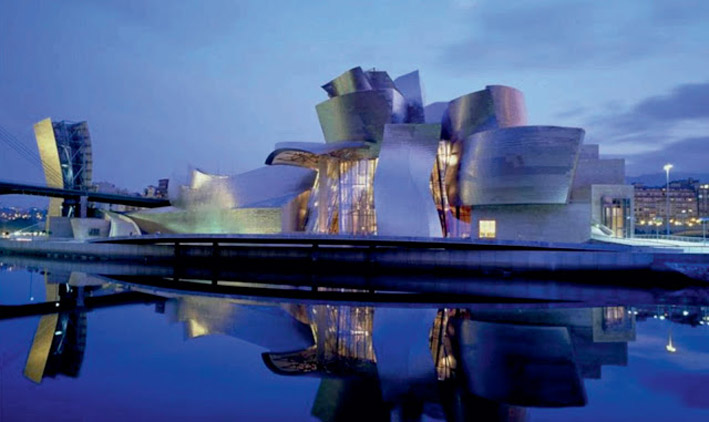 A division of the Guggenheim  Abu dhabi will follow in 2017, which like the outpost of the French art institution will make its debut in the Emirati capital years later than originally planned.

The landmark projects on the emirate’s Saadiyat Island have been hit by a series of delays since being unveiled five years ago, including an announcement last year that the government-backed developer was temporarily dropping plans to award a major construction contract.

The museums had been scheduled to start opening this year, but officials had already said that was no longer possible.

Frank Gehry, the 83-year-old celebrity architect of the Guggenheim Abu Dhabi, is hoping that he will live to see his project completed. The US-based designer was at Abu Dhabi Art for a panel discussion with other famous architects Lord Norman Foster and Jean Nouvel. 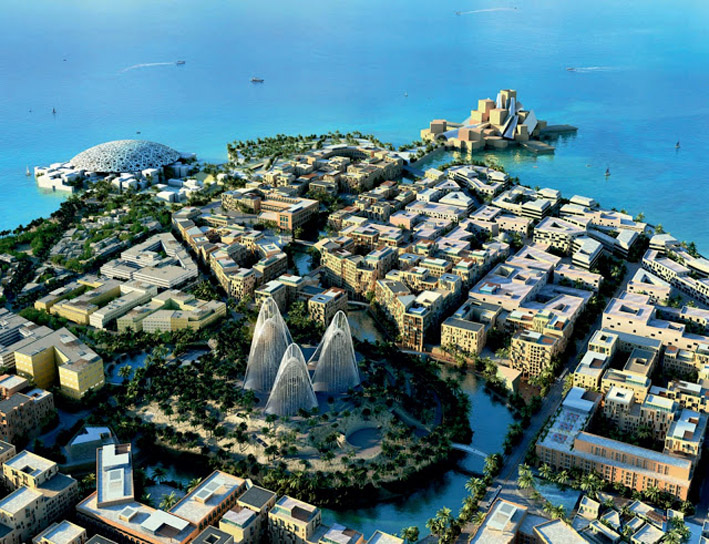 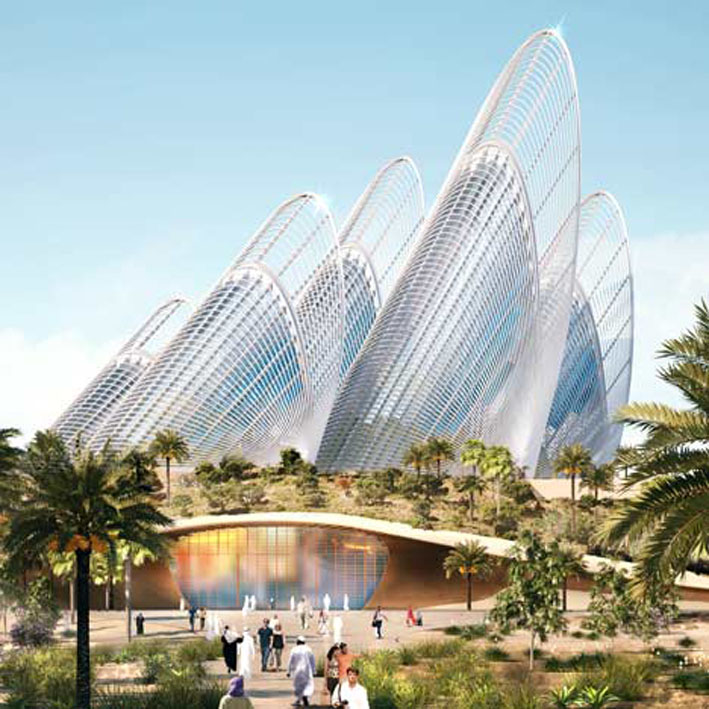 Designs for the Zayed National Museum have been officially unveiled today by His Highness Sheikh Mohammed bin Rashid Al Maktoum, Vice-President and Prime Minister of the UAE and Ruler of Dubai and Her Majesty Queen Elizabeth II of the United Kingdom. Conceived as a monument and memorial to the late Sheikh Zayed bin Sultan Al Nahyan, the founding president of the UAE, the Museum will be the centrepiece of the Saadiyat Island Cultural District and will showcase the history, culture and more recently the social and economic transformation of the Emirates.

Architecturally, the aim has been to combine a highly efficient, contemporary form with elements of traditional Arabic design and hospitality to create a museum that is sustainable, welcoming and culturally of its place. Celebrating Sheikh Zayed’s legacy and love of nature, the museum is set within a landscaped garden, based on a timeline of his life.

The display spaces are housed within a man-made, landscaped mound. The galleries are placed at the bases of five solar thermal towers. The towers heat up and act as thermal chimneys to draw cooling air currents naturally through the museum. Fresh air is captured at low level and drawn through buried ground-cooling pipes and then released into the museum’s lobby. The heat at the top of the towers works to draw the air up vertically through the galleries due to the thermal stack effect. Air vents open at the top of the wing-shaped towers taking advantage of the negative pressure on the lee of the wing profile to draw the hot air out.

Here in the museum these towers are lightweight steel structures, sculpted aerodynamically to work like the feathers of a bird’s wing.  The analogies with falcons and flight are deliberate and relate directly to Sheikh Zayed’s love of falconry. This theme is further celebrated by a gallery devoted to the subject as part of a wider focus on conservation. These inner spaces open up to an outdoor arena for live displays with hunting birds.

Balancing the lightweight steel structures with a more monumental interior experience, the galleries are anchored by a dramatic top-lit central lobby, which is dug into the earth to exploit its thermal properties and brings together shops, cafes, an auditorium and informal venues for performances of poetry and dance. Throughout, the treatment of light and shade draws on a tradition of discreet, carefully positioned openings, which capture and direct the region’s intense sunlight to illuminate and animate these interior spaces. Objects are displayed within niches and on stone plinths that rise seamlessly from the floor.
The museum contains a variety of performance spaces. A large auditorium, lined with Emirati textiles, provides an evocative setting for presentations and films. The lobby incorporates more informal venues for poetry readings, music and dance, where the audience can gather in a circle to enjoy the spectacle and atmosphere of traditional performances.

The interior concept for the restaurant draws on the opulence and hospitality of the Bedouin tent, with carefully selected furnishings. The majlis, or VIP spaces, open onto a central courtyard. This traditional space offers guests a unique perspective, as it is the only place in the museum where one can enjoy views of the wind towers.

Lord Foster said: “It has been a great privilege to work on the Zayed National Museum, to carry forward Sheikh Zayed’s vision and to communicate the dynamic character of a contemporary United Arab Emirates. We have sought to establish a building that will be an exemplar of sustainable design, resonating with Sheikh Zayed’s love of nature and his wider heritage.”

Mean while the Zaha Hadid’s design for the Performing Arts Centre, still have not got a  opening date.

Agent4Stars.com – The Finer Things in Life – I can resist everything except temptation.