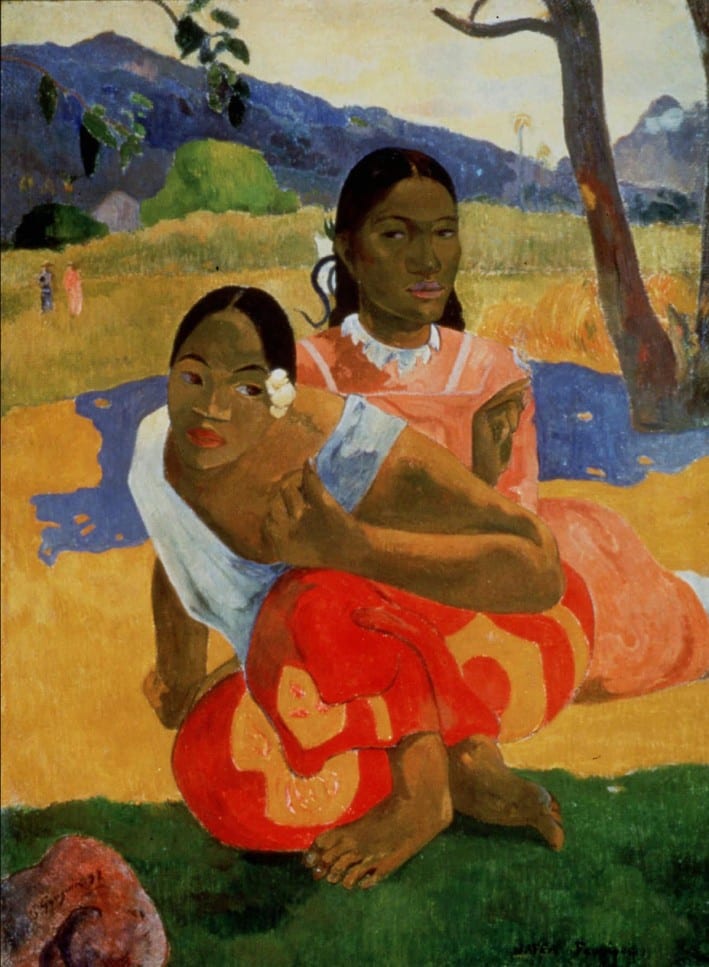 Nafea Faa Ipoipo (When Will You Marry?), a 1892 oil on canvas by French artist Paul Gauguin. Source: Artothek/AP Photo

Above Paul Gauguin painting of two Tahitian girls sold for about $300 million,the work was purchased by the Qatar Museums Authority, according to the NY Times.

The 1892 painting, “Nafea Faa Ipoipo (When Will You Marry?)” was sold by the Rudolf Staechelin Family Trust, a Swiss private collection Staechelin, a retired Sotheby’s executive who lives in Basel, Switzerland, declined to comment on the buyer or the price.
Art sales have more than doubled from $6.3 billion in 2009, as surging financial markets lifted the fortunes of the world’s richest. Auctions globally totaled $16.1 billion in 2014.

The sale of the Gauguin at such a high price may entice other collectors to rethink the future of their trophy works.

On Exhibit
Staechelin’s family trust owns a collection of Impressionist and Post-Impressionist works by Pierre-Auguste Renoir, Camille Pissarro, Claude Monet, Vincent Van Gogh and Pablo Picasso, according to a June statement from the Phillips Collection in Washington announcing an exhibition in which a portion of the works will be on view starting Oct. 10. The Gauguin painting will be included in the show, Phillips said.The painting will be shown at the Fondation Beyeler in Basel starting Feb. 8 as part of an Gauguin exhibition and then at the Museo Nacional Centro de Arte Reina Sofia in Madrid from March 18 to Sept. 13 before going to Washington.The collection was started by Rudolf Staechelin, a businessman who assembled the works during World War I and in the early postwar years, according to the Phillips statement.He was an adviser to the Kunstmuseum Basel museum and after his death, his son Peter loaned the collection to the museum in the late 1940s and early 1950s, according to the Phillips statement.
Ending Loan
The family trust is ending its loan to the Basel Kunstmuseum.
Staechelin, who is the grandson of the businessman, said in his e-mail that the family trust sold the Gauguin for “different reasons, good market, better asset allocaiton (over 90% of our family assets are paintings), different opinions with local authorities.”
The sale will be completed in January 2016 after the exhibition in Washington, Staechelin said.

Sheikha Mayassa Al Thani, the daughter of the emir of Qatar is head of  the Qatar Museums Authority.

The organization is estimated to have purchased or commissioned over $1 billion in art in 2014 alone, which is 2% of the total money spent on art in 2014.

Where necessary, the price is first converted to dollars using the exchange rate at the time the painting was sold. The inflation adjustment may change as recent inflation rates are often revised. A list in another currency may be in a slightly different order due to exchange rate fluctuations. Paintings are only listed once, i.e. for the highest price sold.

Several Hotels in South of Spain sold, which is next?

Join my course, improve your life, move to sunny South of Spain.